"Can you imagine trying to train hungry," wrote KATA supporter Dan Sutich from Washington, "I offer my support, here is $110.40."

Thousands of Kenyan runners dream about becoming a professional runner but most can not find the support needed to make it happen.  Their conditioning fades as does their dream.  KATA's program can help make their dream come true!

Most Kenyans under the age of 25 or so who run seriously are not doing it as recreation or for health reasons, they run because they think they have the ability to be a professional runner.  A career where they can win enough prize money to provide for themselves and their family.

Help us support these promising athletes

In the United States most runners of all ages run for recreation and or for health reasons.  Most Americans do not even know a runner can make a living, a very good living from running races.

Eliud is their hero, and everyone knows Eliud is earning millions of dollars for his efforts and well deserved too.  He has lowered the world record to 2:01:09 and he thinks he can run even faster. 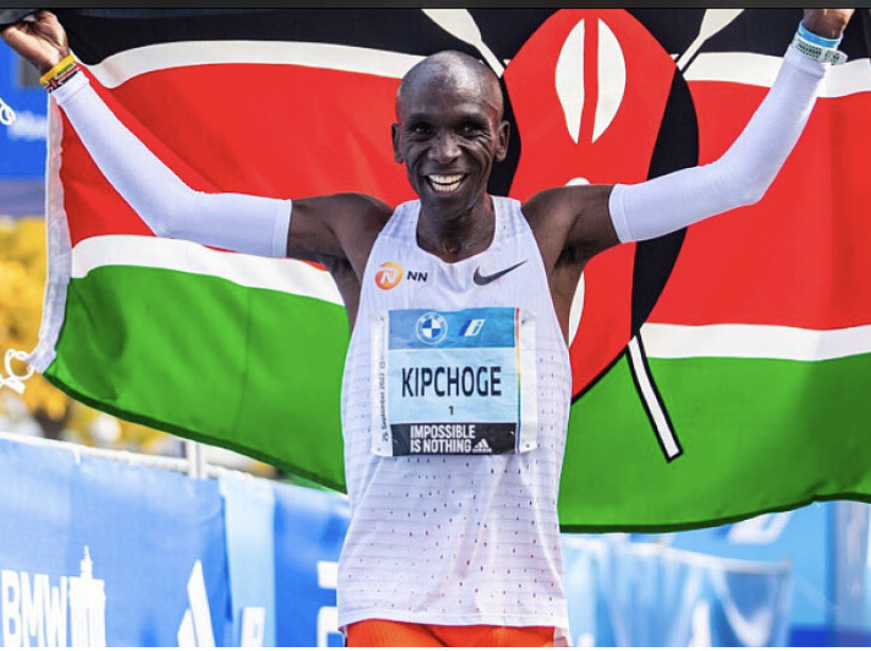 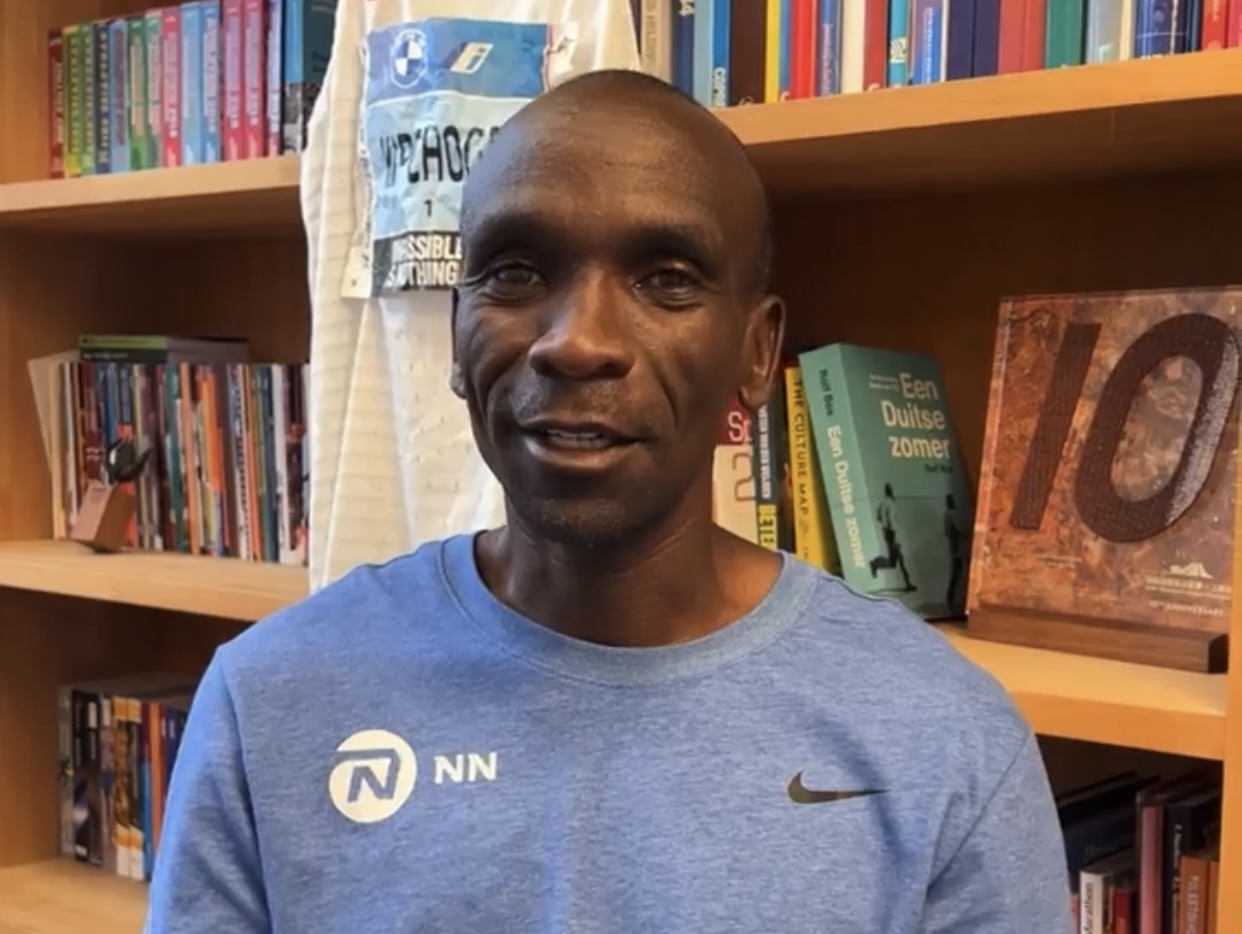 The professional sport of running as become very competitive.  Gone are the day where a man could run a half marathon in one hour and five minutes or a woman one hour eleven minutes and expect to win the race.

Maybe these times are still fast enough to win a race that does not offer prize money or very little but not races that pay out several thousand of dollars to their winners.

"But many do not have any support.  Their family may be very poor and have very little money, even for food. The parents may not even know that professional running is a way for their son or daughter to make a living, in fact a very good living."

The family, however expects their son or daughter to go out and get a job so they can bring home money for food.  Maybe a job on a farm or even in an office building. Yes, this would take care of the immediate issue of not having food and many potential professional runners have no choice but to take this path.

However, this most likely will make it almost impossible for them to fulfill their real dream.  A much better career than working in the fields on a farm.

"It takes a lot of training these days to make it as a professional runner," says coach Joseph.  "We train twice daily six days per week.  And our athletes do more than just run 10 miles a day. It is a total program aimed at getting the most from the runner." 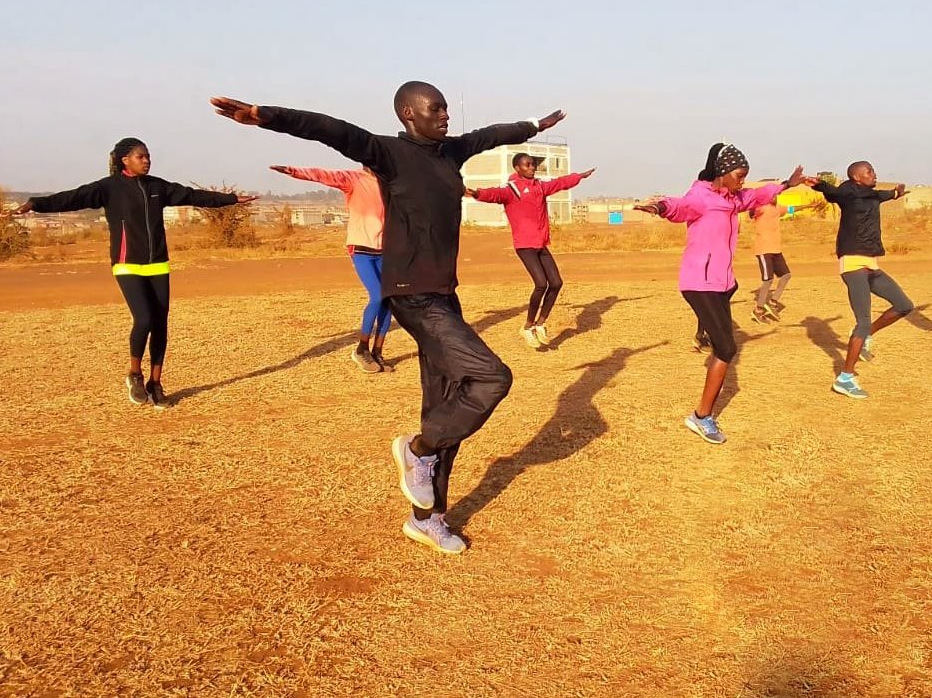 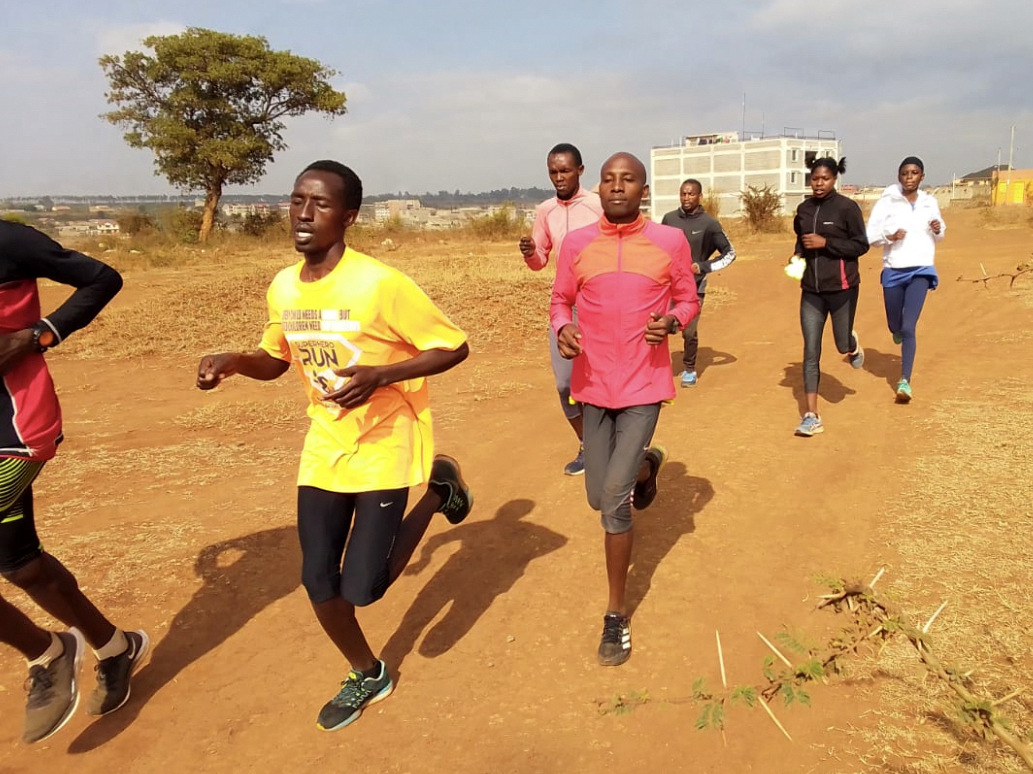 The talented runner needs support to make running their profession.  If their parents can't help, who do they turn too? In most cases there is no one else.  They attempt to do the necessary training (because they know they are talented) on their own and basically "beg" for any food they can find.

But this is not going to last very long.  And the chances of being discovered is almost impossible. Their shape will start fading away and they will just become another dreamer who never made it.

Also the type of training necessary to run quality times, burns a lot of calories that need to be replaced. Food they do not have without support.

If a son or daughter in the United States wants to be a professional soccer player and it is clear they are talented, they most likely would get the support they needed.  They certainly would not be missing meals or going to bed regularly hungry.  Most parents in the US and in many other countries find a way to support their kids to pursue their passion.  Or there are programs, like schorships offering support.

Bob and Catherine Anderson created the Kenyan Athletics Training Academy (KATA) in Thika to help potential pro runners become professional runners.   The 23-room Academy trains, feed and house these runners.  Offering the support they were not getting, three meals a day, twice a day training six days a week, a monthly time trial to gauge their fitness level and a clean place to sleep. 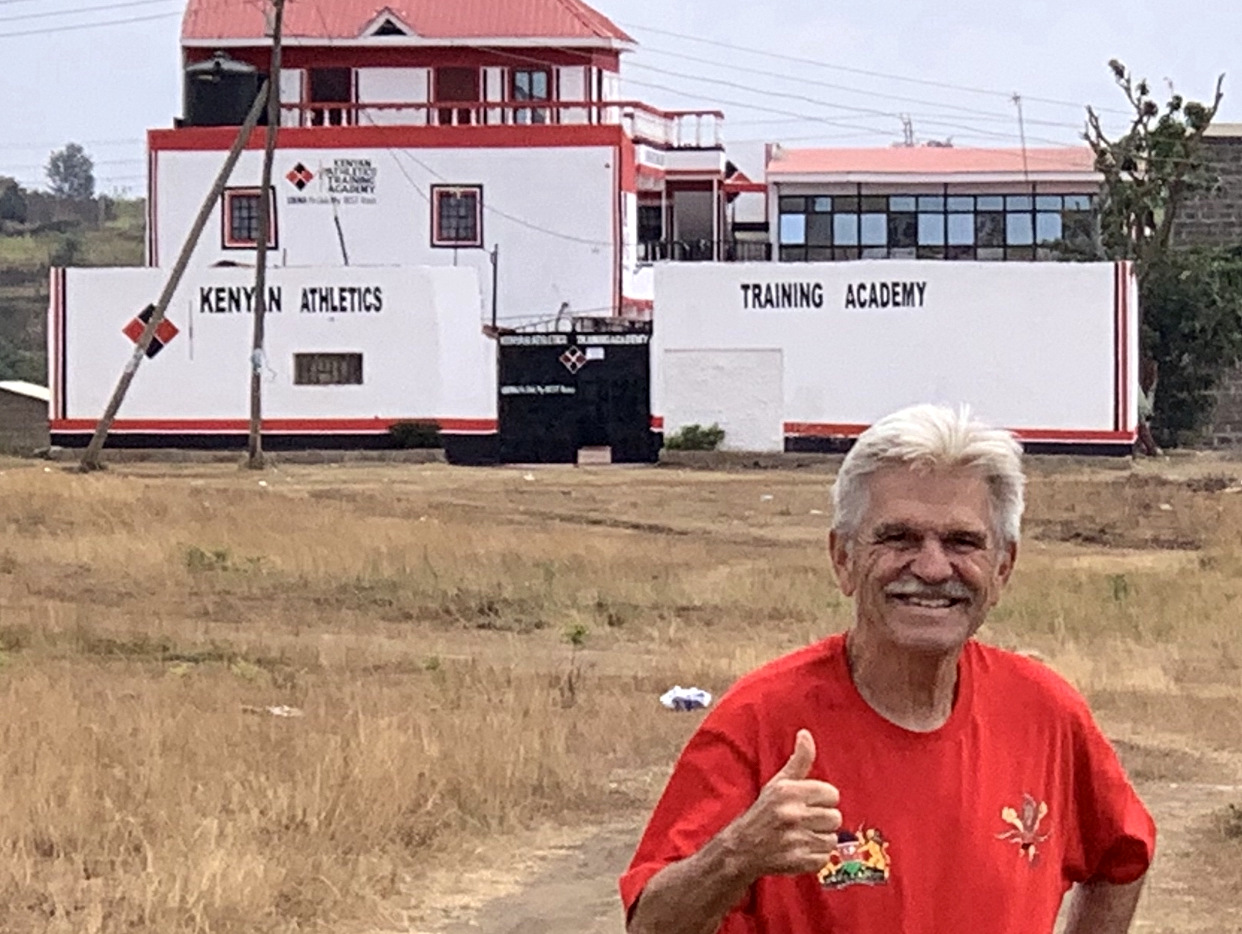 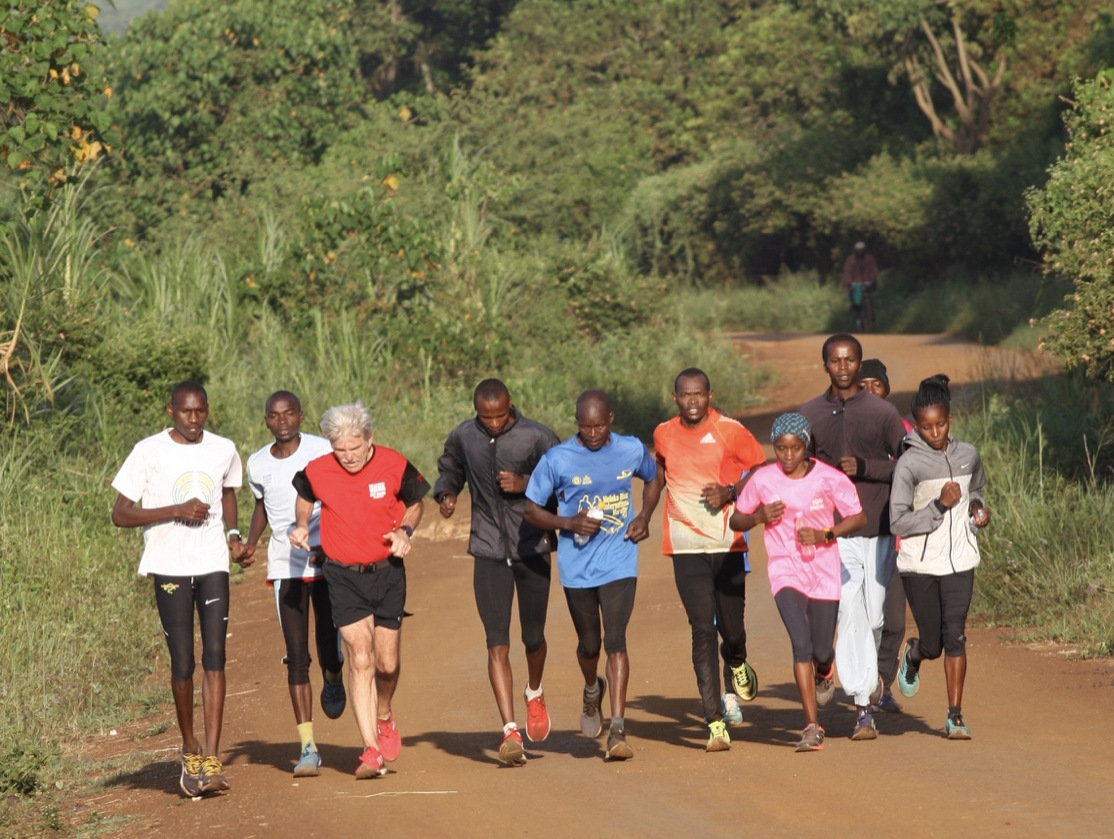 The Kenyan runner does not pay anything for these services.  They are, however required to work 20 hours per week at KATA on things like cleaning, painting, computer work on the website My Best Runs (like posting results, links, etc.) and now operational duties for the KATA Hunger Project.

KATA also does not take a commission from their prize money if and when this happens.  KATA does not manage runners, finding races and booking their travel.  Managers come to KATA to find talent.

Coach Joseph, KATA's head coach has over 30 years of experience as a AK senior coach.  He is very well respected.  Additionally, he is working on a series of four books called Train the Kenyan Way which will be available over the next six months. 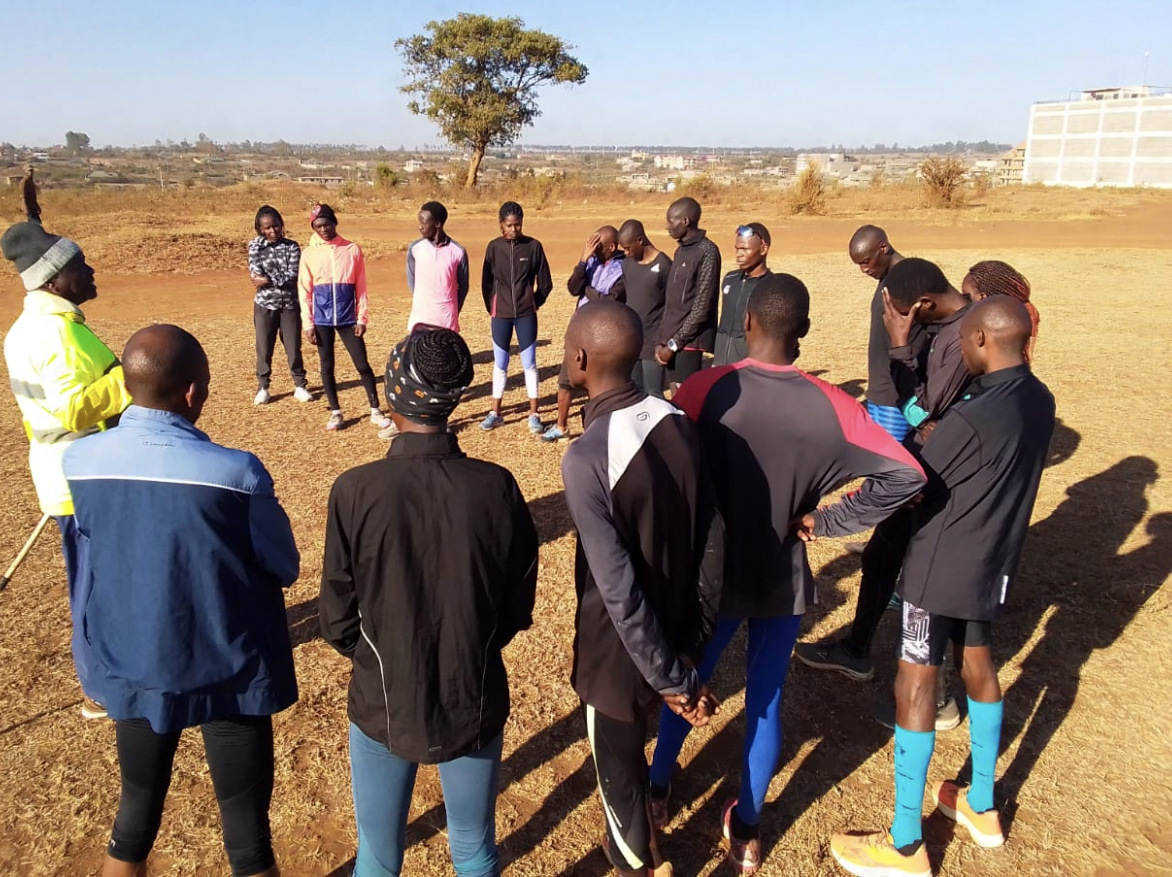 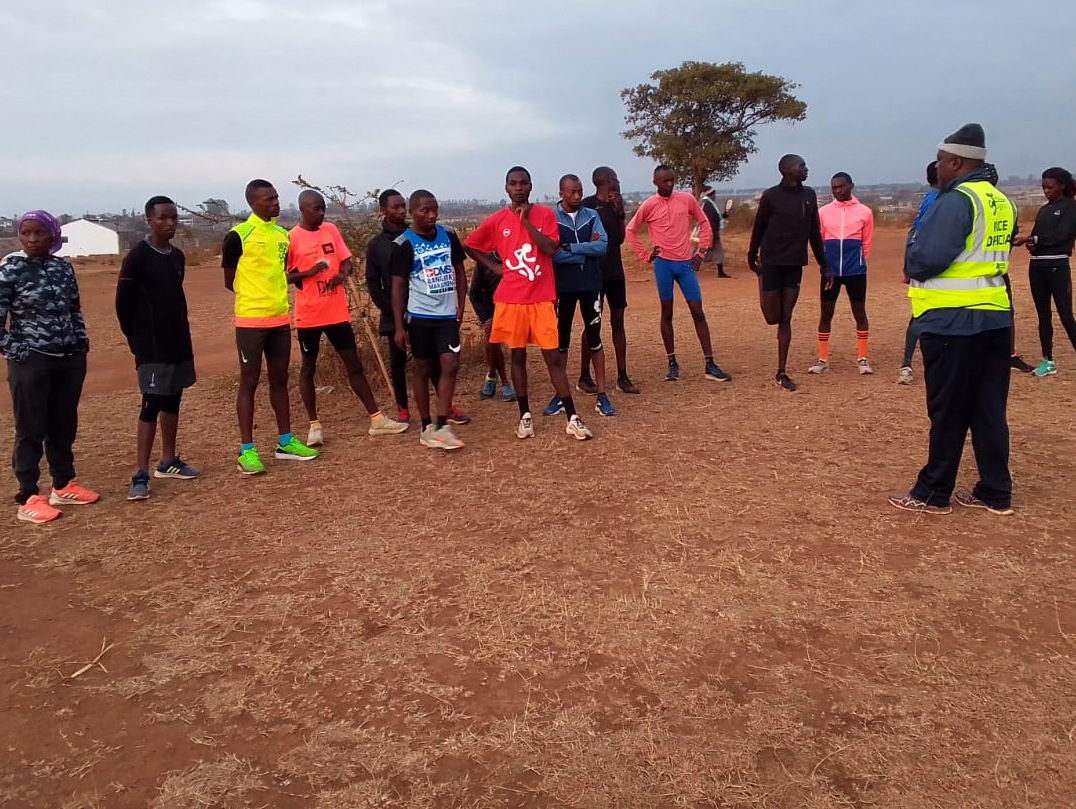 In a short period of time the training programs he has put together at KATA are showing good results.

Eston Mugo checked into KATA 14 months ago.  He had run 36:50 for 10k, not a bad time but not good enough to make it as a pro runner. Eston was getting no support and not able to eat regularly.  He needed support and he contacted KATA.

With a lot of hard work, Eston has already gotten his 10k time down to 30:04 (during a KATA monthly time trial) and will soon be under 30 minutes.  He could already win many pro races, especially in the US and once he shaves off another minute he will be ready to travel to Europe.

Eston also spends 20 hours a week on the My Best Runs website.  He has improved his computer skills in doing so and he is teaching other KATA athletes these skills as well.

(My Best Runs is a website started in 2012 by Bob Anderson, former founder of Runner's World magazine in 1966 and publisher until 1984 when he sold it. RW had 2.5 million monthly readers. MBR  has nearly one million annual readers and reports on the best, most unique, and most interesting running races in the world.) 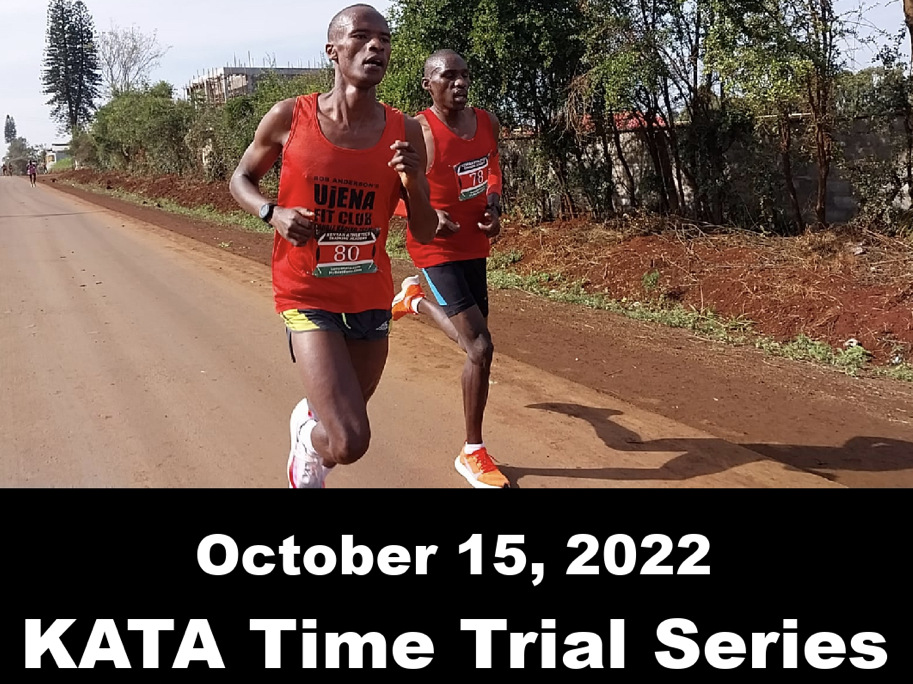 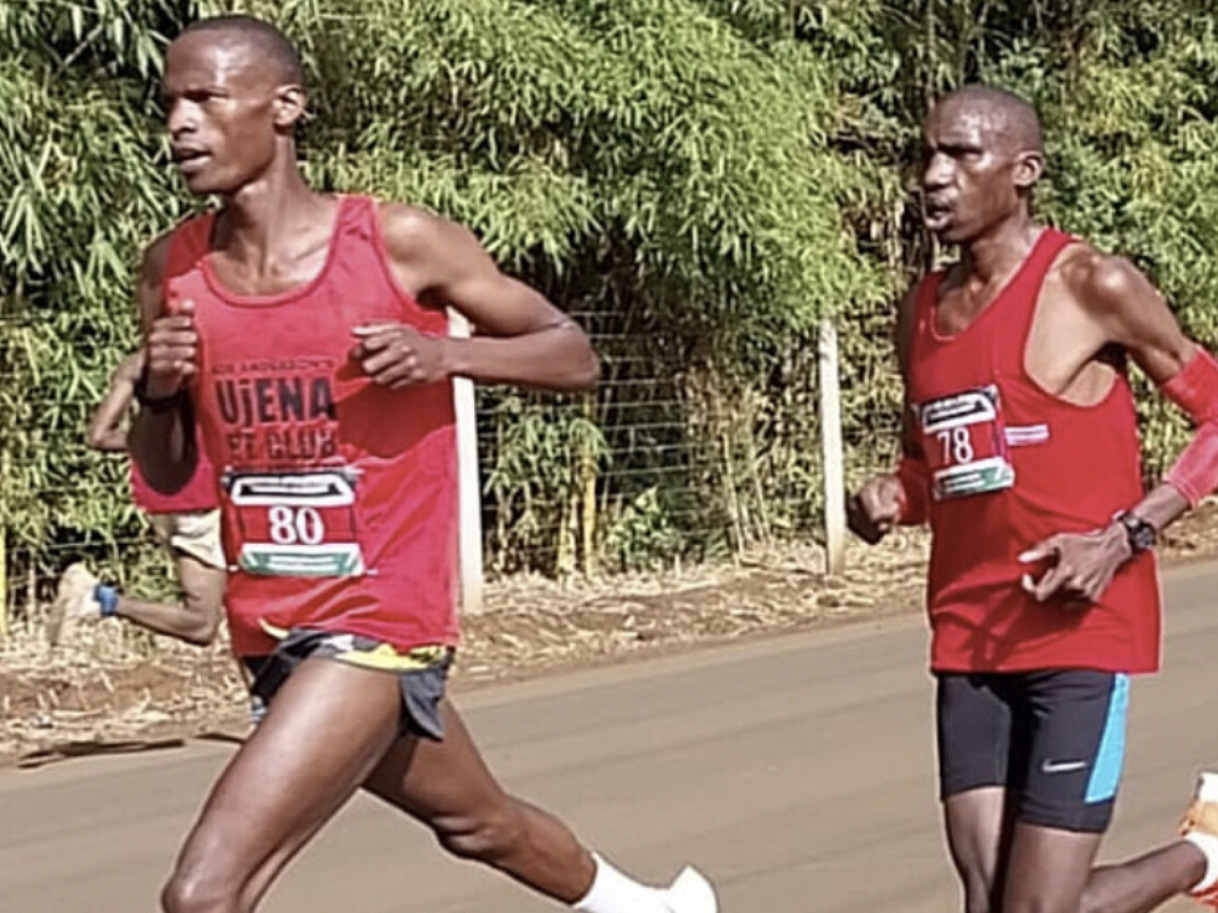 Another example of coach Joseph's success, is Peter Mwaniki. Peter's family and even his brother offered him no support.  They did not believe that running could be a profession.  They were poor and could not provide any support.  He had run a 32:30 10k, a very good time for a recreational runner but not for a pro.  Peter sought out KATA for support.

"After 13 weeks it was clear he was very talented," says KATA manager Florence Kimiti.  "Our 13-week program was not officially established yet but the program had already been born."

KATA asked him to stay and he can for sure call himself a professional runner now.  During the monthly KATA time trial he clocked a 29:00.9 10k at altitude.  A manager picked him up and set him up in Italy already twice to run races.  Most recently he clocked a 1:00:29 half marathon (Oct 2, 2022), setting a new course record while winning by nearly two minutes. 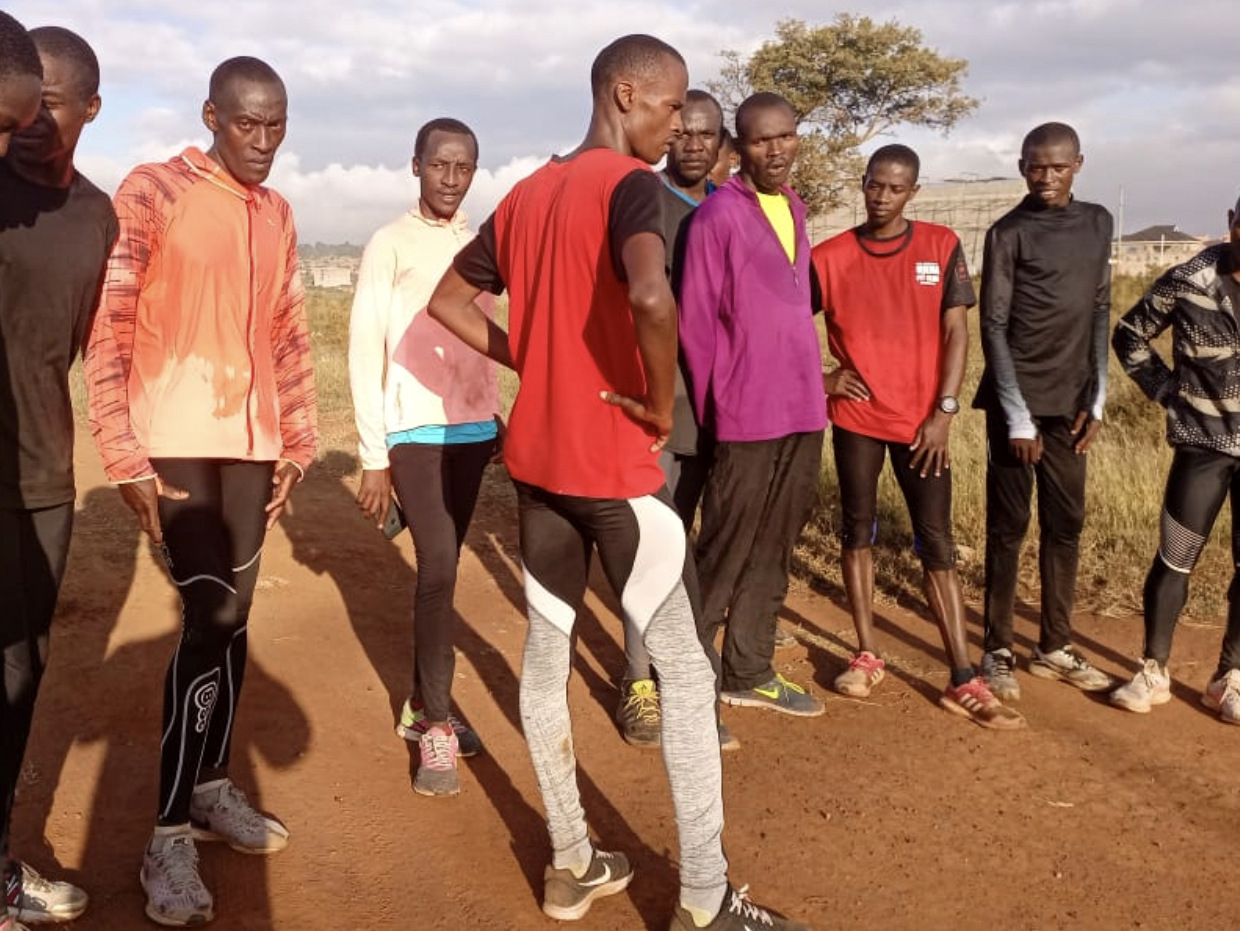 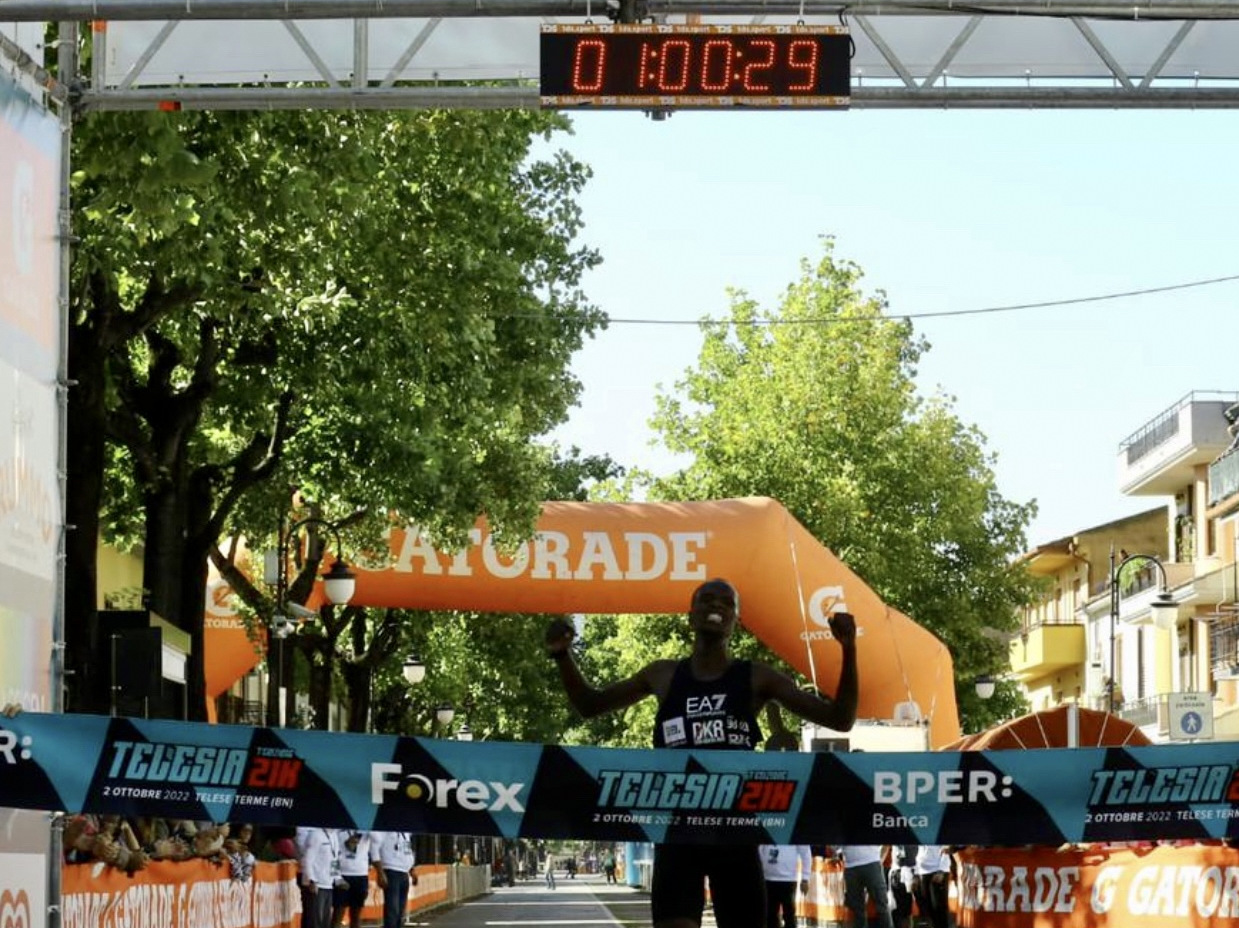 For now these runners would come to KATA in Thika for training and support.  At the end of each week, they would be given four kilos of home-grown fresh fruits and vegetables.  They can also apply to receive four kilos for other family members as well.

The number of Kenyans in Need (starting Friday Dec 23, 2022) KATA can support will be based on the amount of contributions received by supporters.

During the 13-week time frame, he or she would be required to do our workouts and run in our monthly KATA time trial. The results along with a story and photos are posted on My Best Runs giving international exposure. These KATA time trials were started Sept, 2021 and have been held monthly without fail.  Most have been 10ks but difference distances and surfaces are being added going forward. 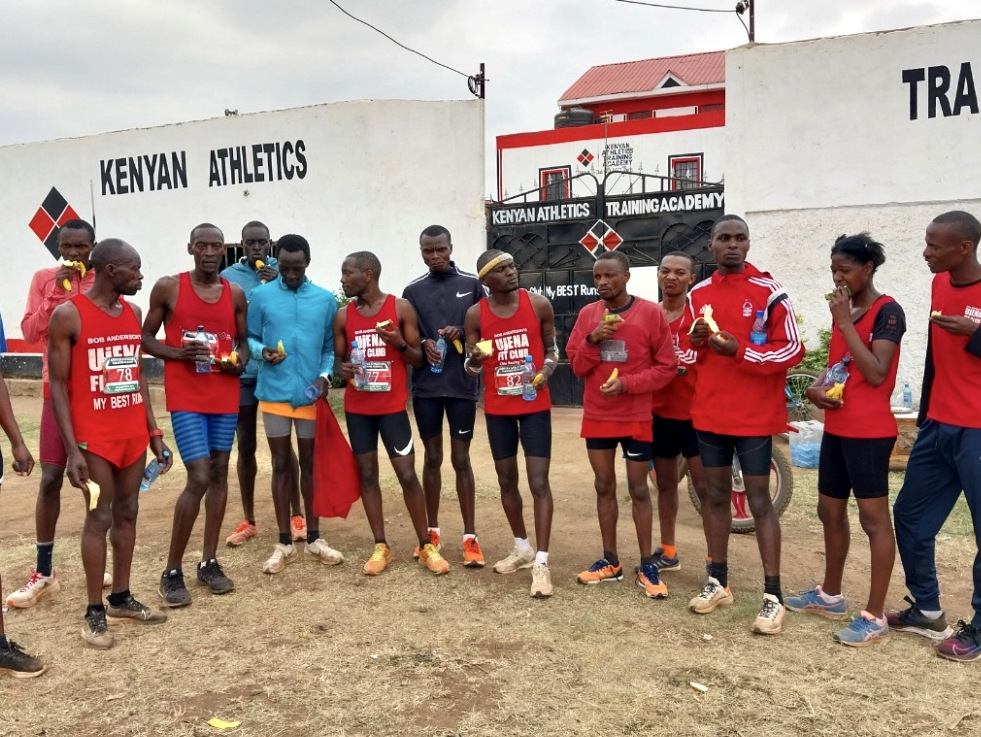 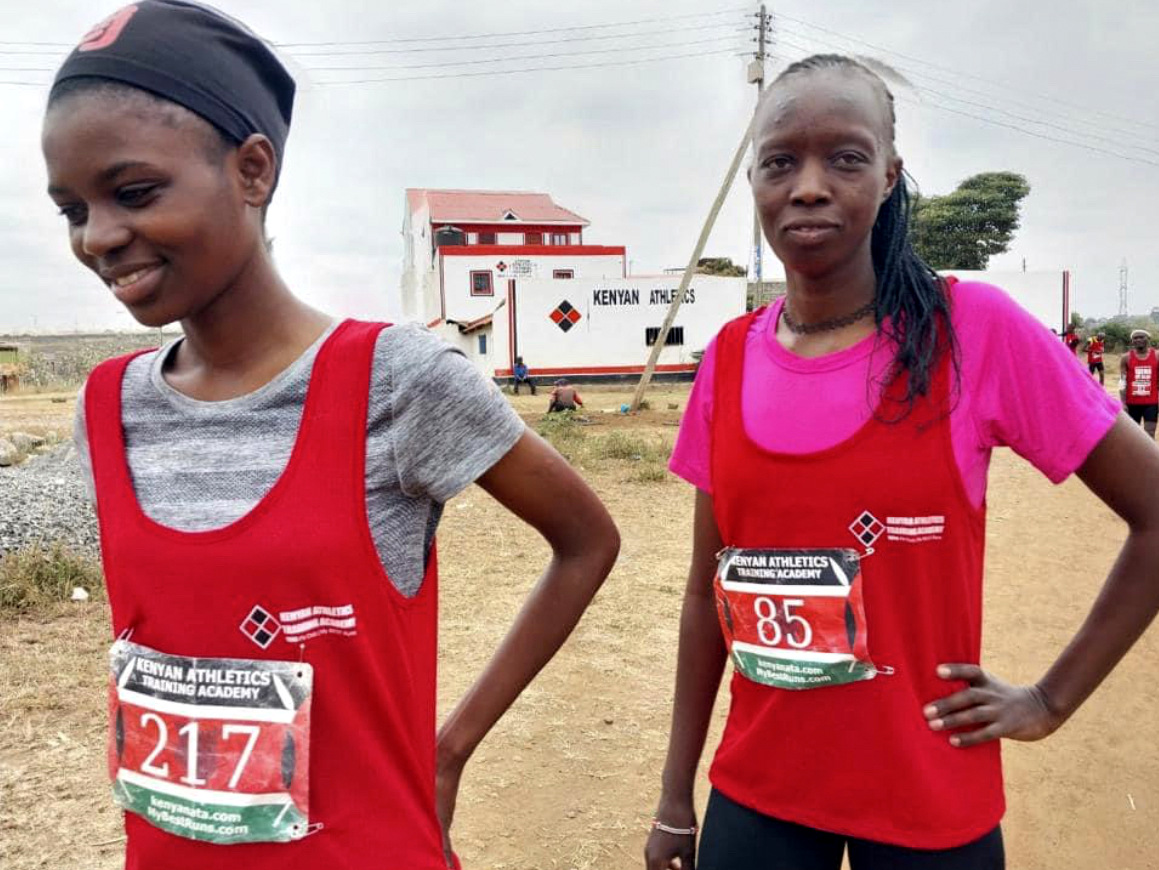 Obviously in just 13-weeks almost no runners could improve so fast to make it as a pro. However, let say the monthly time trial is 10k, a male runner runs 36 minutes. Four weeks later he runs 32 minutes. And then runs 29:30 four weeks later.

"We know from experience this person has the DNA to become a star. a professional runner," says coach Joseph.

With the exposure he would get through My Best Runs and social media, he most likely will get picked up by a running camp or a manager.  Or KATA will offer to take him or her in.  The runner would have made the big step toward being a professional runner.

Right now the only training location is in Thika at KATA. "However, we will be setting up training at the KATA Fresh Farm about 10k from Embu and other locations," says KATA manager Florence. 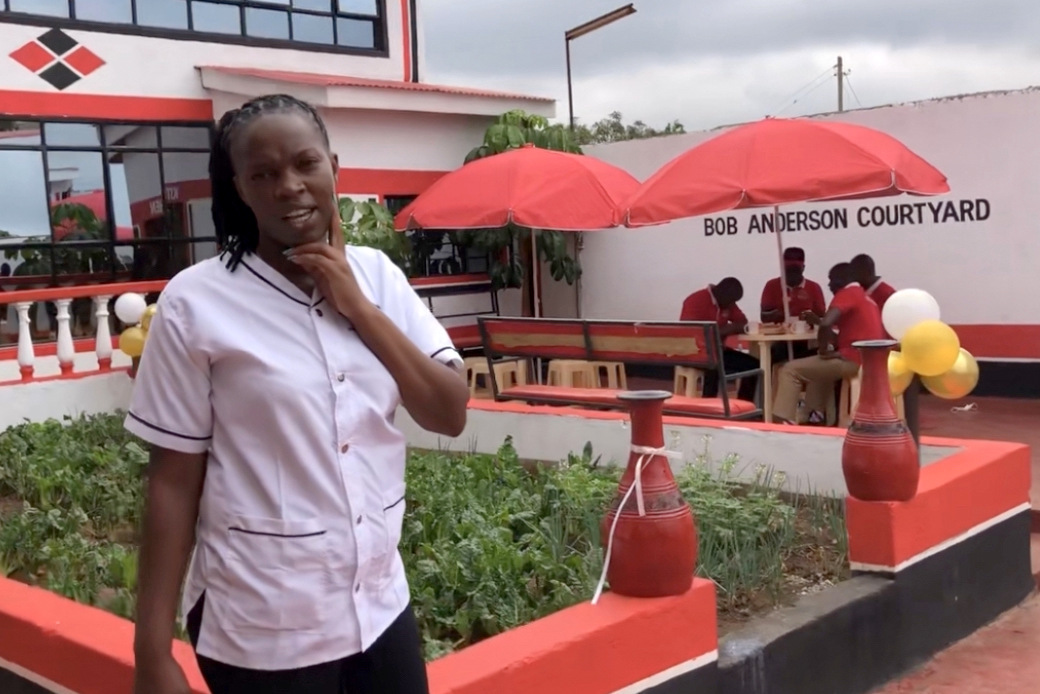 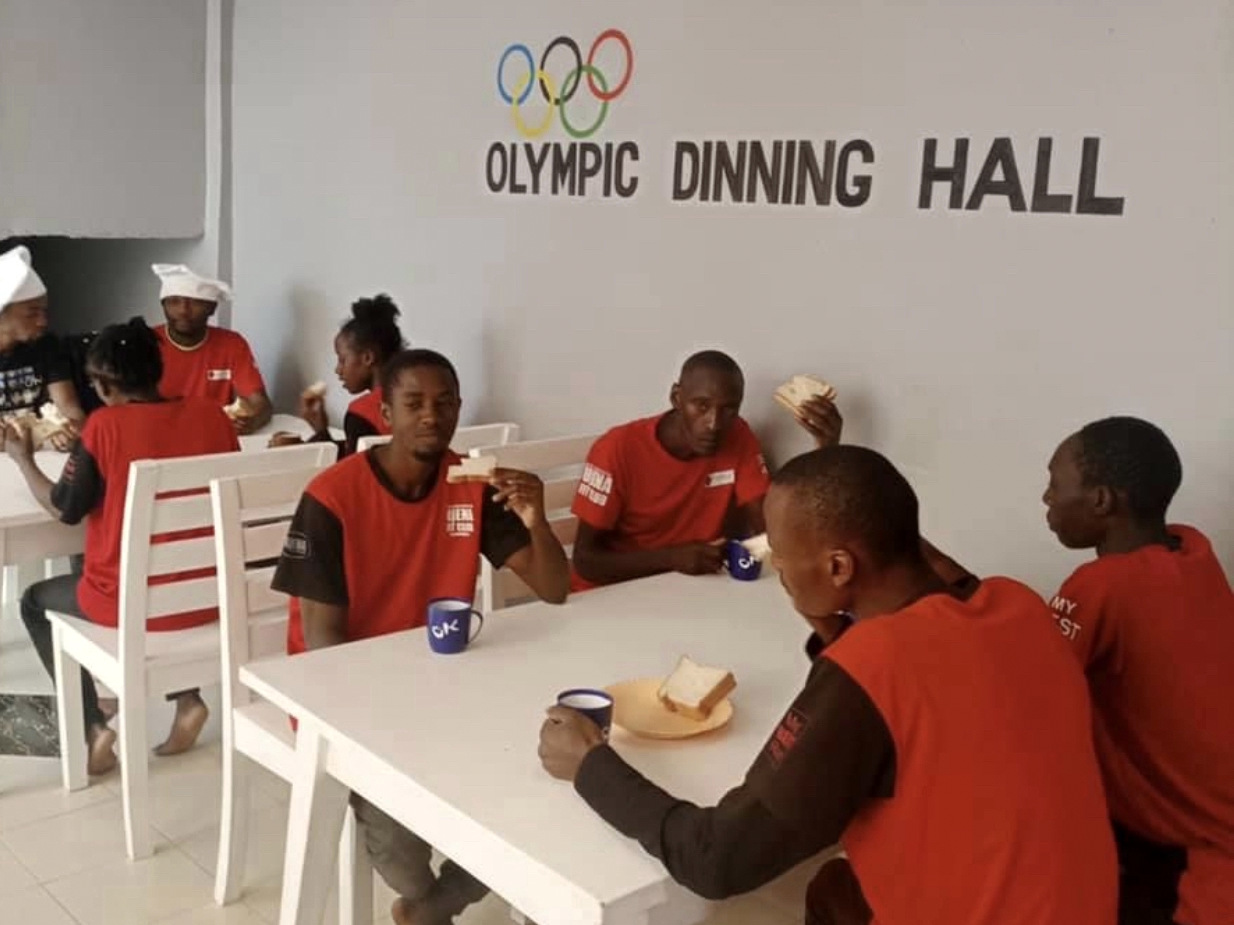 In all cases, there will be daily (six days per week) training sessions, a monthly time trial and weekly four kilos of KATA food available for pick up.  Those showing great promise may also be asked to come live, train and eat at KATA in Thika sooner than 90 days.❤️